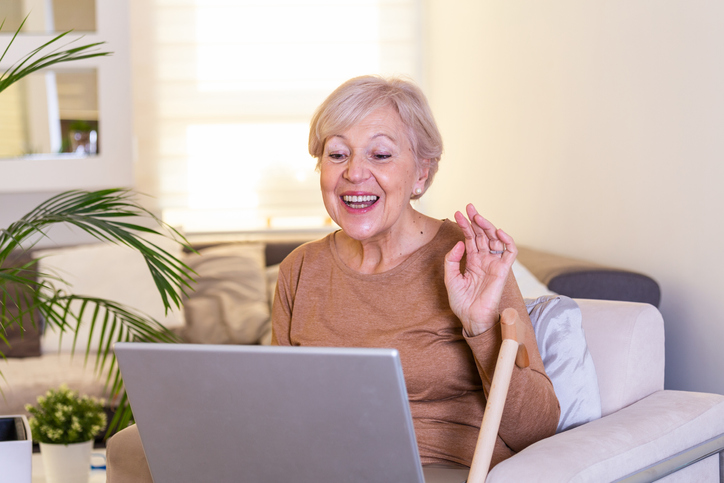 While the COVID-19 pandemic has brought it into sharper focus, loneliness and social isolation have long been a major issue facing older adults. Even before the pandemic, the CDC estimated that one-quarter of American seniors were socially isolated, putting them at a higher risk of everything from anxiety and depression to premature death.

At the Federation-supported Jewish Family & Children's Services, they're all too aware of the "loneliness epidemic" facing their seniors and the barriers that keep people from accessing social connections.

"We do a lot of programming for seniors at the Brodsky Center in Bala Cynwyd," said Paul Groch, JFCS Philly Vice President of Operations. "But with an older population, not everyone can travel easily. We were actually looking for a solution to help connect people even before the pandemic started."

For Groch's team, the solution came from an Israeli start-up called Uniper, which utilizes technology to help seniors maintain an active social life from the comfort of their homes.

Uniper provides a small device—similar to a Roku or an Apple TV—that connects to both on-demand programming (concerts, ballets, news, Russian-language material), and live events like classes or social groups.

“It’s a simple box and a simple remote," said Groch. You can’t get lost. It's a simple solution for folks that aren’t used to using technology."

JFCS's Bala Cynwyd headquarters now has a broadcasting center where they livecast events to Uniper, which was originally brought to the region through a JFRE grant and now being managed by Kleinlife. Since the live events are with people in the Philadelphia region, the seniors have the opportunity to see familiar faces. It's this type of casual interaction—a conversation with our barista, a chat with coworkers—that we take for granted, but are extremely meaningful for those in isolation.

"They can see each other and be seen themselves. They take an active role in the programming instead of passively receiving the information," says Groch.

When COVID-19 hit, Uniper access became more critical. Since Uniper's programming can also be accessed from a web browser, Groch and his team distributed Chromebooks to seniors along with detailed instructions about how to set them up. Later, they also sent wireless mice after realizing that many of the older adults struggled with the laptop's trackpads.

"Again, the emphasis has to be on simple," said Groch. "This is a population that is not used to computers."

Since introducing  Uniper, JFCS has found significant improvements in participants' mental health. Seventy-five percent of Uniper participants improved or maintained their anxiety score and 92% improved or maintained their depression score. Most impressively, JFCS found that 75% of Uniper users showed overall improvement across all the measured categories, compared to only 25% of those who did not use Uniper.

While Groch says they have a long way to go—the number of Philadelphia seniors who don't have Internet access at all "keeps him up at night"—he's proud of what JFCS has achieved.

"It's really fortuitous that we already had so much of this in place," he says. "It made a big difference over the past few months."

Gifts to the Jewish Federation support JFCS programs like this one. Donate today and make the world a little less lonely!