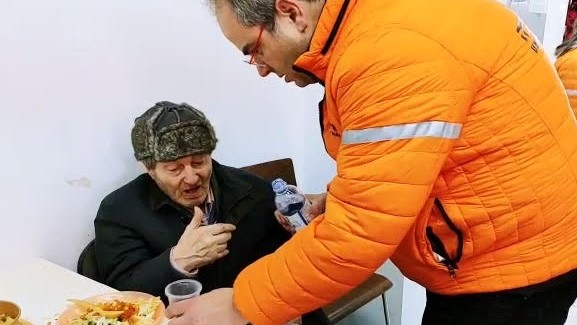 Eli Beer first saw ninety-year-old Holocaust survivor Mikhael crying in a refugee soup kitchen at the border of Ukraine and Moldova. The stark reality of running from war again was too much to bear.

Traveling five days to Kishinev, Moldova, Mikhael was exhausted and at a crossroads as to what to do next.

“I told him we’d bring him to Israel,” said Beer, president of United Hatzalah of Israel. “But he was hesitant.”

Despite having family in Israel, Mikhael did not own a passport. He also had never left Ukraine.

But Beer didn’t give up. After a phone call with Mikhael’s family, spirits rose, and the necessary entry permits were filed for Israel. The morning after their meeting, Mikhael began the journey to Israel with 160 other refugees.

Similar to Beer’s first encounter, Mikhael was again crying, but now they were tears of joy as he made his journey to safety.

United Hatzalah has a three-year grant from the Jewish Federation of Greater Philadelphia, which it uses to train volunteers to save lives in Israel’s southern region. It is the largest independent, nonprofit, and entirely volunteer Emergency Medical Service organization based in Jerusalem, and is the first on the scene in an emergency when time matters most.

The Jewish Federation supports many organizations, like United Hatzalah, as part of its ongoing commitment to create deep connections in Israel to ensure safety, security and prosperity.

“Helping fellow brothers and sisters in Israel and around the world in their time of need, United Hatzalah embodies the qualities that we look for in a partner as we work toward our pillars of security and resilience in Israel,” said Kelly Romirowsky, chief strategy and impact officer for the Jewish Federation.

Although United Hatzalah is based in Jerusalem, Beer and his team have been at the border of Ukraine and Moldova since the war in Ukraine erupted. At the border, the team provides refugees medical treatment, shelter and food, as well as secures entry permits to Israel before flying refugees for aliyah.

“Our mission is to make sure Israel is safe, but now, we cannot stand by the sidelines watching this horrible human disaster take place and not help,” reflected Beer.

In the first three weeks of the war alone, United Hatzalah provided medical assistance to more than 5,000 people, served more than 40,000 hot meals and helped approximately 1,700 refugees travel to Israel.

“We are proud to partner with an agency that goes above and beyond when circumstances call for it,” said Romirowsky.

Now in the second month of war, United Hatzalah and 34 other NGOs have secured additional funding from the Jewish Federation system’s emergency response efforts. As of April 18, $50 million has been raised for humanitarian aid for Ukrainian residents and refugees. As the war rages on, this additional funding will support and expand United Hatzalah’s life-saving work.

“It is encouraging to see our local community coming together as part of the national effort within the Federation system, giving generously in support of our Ukrainian Jewish brothers and sisters,” said Adam E. Laver, chair of the local Jewish Federation’s Emergency Response Committee. “Dollars received from our Jewish Federation of Greater Philadelphia contributors are supporting organizations that are saving lives each and every day.”

WATCH: The Need is Great

As of April 18, The Federation system has raised $50 million to support refugees and Jewish communities in Ukraine and bordering countries during their time of need. Learn more about the impact being done by the Jewish Federation of Greater Philadelphia for our Jewish Ukrainian brothers and sisters by clicking here.