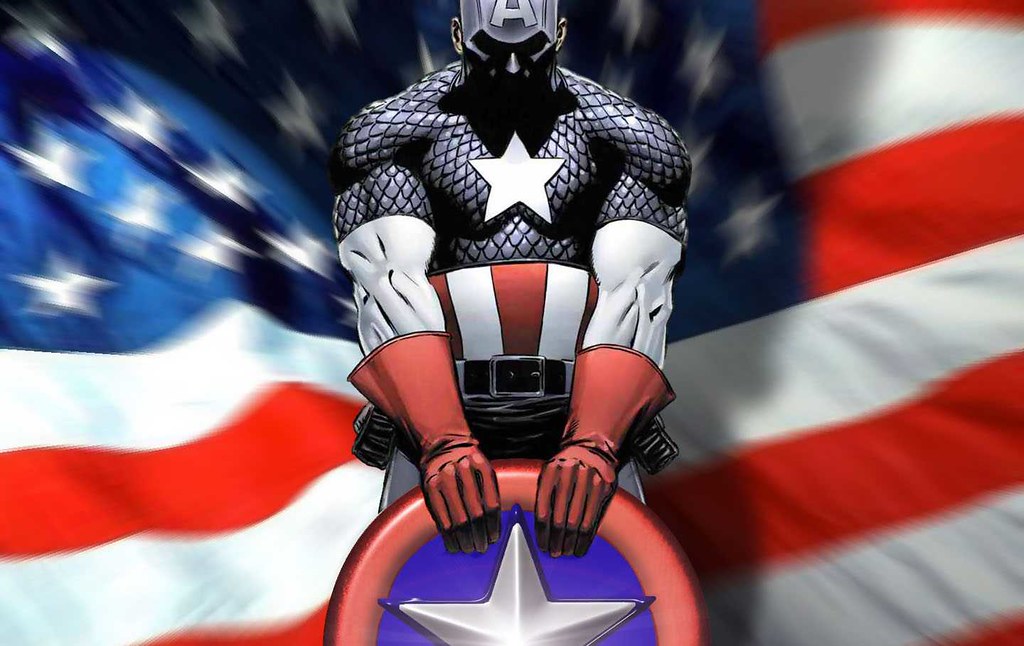 This July 4th, Learn The Secret Jewish History Of A Comic Book Icon

Joe (née Hymie) Simon, grew up in a poor, Jewish family in Rochester, New York. His father, an immigrant from Leeds, England, worked in a tailor shop that doubled as their family home. As a child, Simon loved to draw and would sell pictures to his classmates. Upon graduating high school, he was hired at 18-years-old as an assistant art director for the Rochester Journal-American. Simon drew political, sports and editorial cartoons for the paper, supporting his family on the $15 a week he earned. He went on to work as a cartoonist for The Syracuse Herald and The Syracuse Journal before moving to New York City in his early 20s, where he became the first-ever editor at Timely Comics, now known under the more familiar name Marvel Comics.

Similarly, Jack Kirby, born Jacob Kurtzberg, was raised in a poor, Jewish family in New York City. As a child, he often found himself in fights with neighborhood kids, a product of the tough environment in which he was raised. Kirby’s parents were both Austrian-Jewish immigrants and, like Simon’s father, Kirby’s father was a tailor. Kirby was a prodigigous artist and enrolled in the Pratt Institute at age 14. Hover, he dropped out after a week, instead, teaching himself how to draw. He used several pen names for his comics, and Jack Kirby is the one that stuck. According to Kirby, it was not to conceal his Jewish identity that he changed his name; rather, it was to Americanize his name. In his early career, he worked for several of the most well-known comic book publishers and animation studios including the Fleischer brothers (also Jewish!), who produced the first TV adaption of Superman.

In 1940, Kirby met Simon, and the legendary duo collaborated to create a superhero who would resonate it wartime: Captain America. The first Captain was published in March of 1941, one year into World War II, and it sold almost a million copies. Its success prompted Simon to invite Kirby to join him at Timely Comics as the company’s art director.

But while Captain America's fanbase quickly grew, it also attracted critics. Opponents of the war protested outside of Timely Comics’ New York City office every day for months. Still, Simon and Kirby had high profile fans: Mayor Fiorello La Guardia personally contacted Simon and Kirby with his stamp of approval.

Shortly after leaving Timely Comics to work for National Comics Publications (now known as DC Comics), both men were drafted⁠—Simon into the U.S. Coast Guard and Kirby into the U.S. Army.  During Kirby’s service, a lieutenant learned that he was an artist and assigned him to perilous reconnaissance missions to draw maps and pictures of nearby towns. Simon’s unconventional skills were put to the test as well; he produced a comic book to promote his unit and recruit members to the Coast Guard.

After completing their service, Simon and Kirby rejoined forces to launch their own comic book company, Mainline Publications. Unfortunately for them, this was during conservative era of the 1950s and comics were being blamed for a rise in crime and juvenile delinquency. In fact, two of Mainline Publication’s titles were used in psychologist Fredric Wertham’s Senate testimony on violence in the media. These hearings were televised nationwide and ultimately brought so much bad publicity that Mainline Publications collapsed.

Simon branched out into other types of art, founding Sick magazine, a satirical publication that lasted 134 issues over 20 years, from 1960 to 1980.  Kirby, who stayed in the comics industry, went on to create some of Marvel's most notable superheroes, including Fantastic Four, X-Men, Thor, the Hulk, Iron Man, and Black Panther.

Later in life, Kirby moved to Southern California to be closer to Hollywood studios, where he would pursue his lifelong dreams of working in television on animated series.  Both Kirby and Simon have received some of the most esteemed awards in comics for their achievements and are still referenced in pop culture today.  Believe it or not, Kirby has both an asteroid and a crater on Mars named in his honor.  And, just like the two Jewish icons who created it, Captain America remains one of the most celebrated, all-American, quintessential figures to date.